Much has been written about Vince Gironda and his old school bodybuilding diets. In fact, there used to be a running joke in the late 70’s and early 80’s that used to go something like “Vince and Eggs”! After Vince has advocated his Steak and Eggs Diet, as well as the 36 Eggs a Day Diet, most people simply shared the opinion that Vince only believed in High Protein, High Fat Diets, which couldn’t be further from the truth. Although Vince advocated such foods for bodybuilding to their anabolic effect within the body, Vince actually advocated carbohydrates too! What?? Carbs?? Come on, you have to be kidding right? I’m pretty sure that’s what most of you must be thinking….but no. He advocated carbs, and yes, it’s not April Fools!

At this point, it’s important to recap o Vince’s nutritional principles. As Vince famously said in The Wild Physique, “Different needs require different diets”. “You must know when to use different each (diet) to achieve best results”. These two statements make up the core of Vince’s beliefs, principles and practices in regards to bodybuilding nutrition. With this completely logical approach in mind, it is understandable then that Vince would advocate carbohydrates to certain trainees.

Why did Vince advocate Carbs?

Most people that know a thing or two about Vince’s diets will understand that the Steak and Eggs Diet and the 36 Eggs a day Diet were both ketogenic style diets aimed at gaining muscle whilst losing fat….and this is really important so I will repeat it again…WHILST LOSING FAT. Therefore, these ketogenic diets served a purpose which was to build muscle whilst losing fat, and therefore may have been prescribed to an intermediate or advanced bodybuilder looking to compete for a physique contest.

Vince was not as dogmatic as most people think. He was actually rather flexible with many aspects of bodybuilding including nutrition. He simply asked that once you received advice from him, that you stick to it, Much like a teacher would expect of his student. Therefore if you were looking to lose fat and build muscle, Vince would prescribe and recommend a ketogenic style diet. But if you were underweight and a novice needing to put on overall size and strength, then you needed protein, fats AND CARBS! Even if you were a professional bodybuilder, and off season, or just on a maintenance program, then he would also recommend a Balanced Diet with carbohydrates.

When to eat Carbs and What Type to Eat

In The Wild Physique, Vince has to state the following about carbohydrates.

Carbohydrates raise the blood-sugar level and supply the muscles with energy.

“Carbohydrates raise the blood-sugar level and supply the muscles with energy. They also allow the body to use protein more efficiently and aid in maintaining a correct acid-alkaline balance-a critical point often overlooked by those on high-protein diets”. Now this doesn’t sound like somebody that is totally against the consumption of carbohydrates.

To the beginner and top-level bodybuilder alike, he recommends that all junk food be cut out however. “In your choice of foods, think nutrition first. Cut out all processed and junk foods from your diet. If you have a choice between a baked potato and greasy french fries, take the baked potato. Fresh fruits and vegetables are better than canned ones and stone-ground wholewheat bread is better than refined white bread. A glass of milk has more nutrition in it and will do more for your bodybuilding than a dozen cases of soda. Also try and eat as many raw or lightly cooked foods as possible. Thus vital nutrients and enzymes are not destroyed in the cooking process and the foods are easier to digest”.

It’s interesting to not the list of carbohydrate foods that Vince lists as beneficial to good health and that is recommended to the beginner and off-season bodybuilder. Baked potatoes, fresh fruit and vegetables or lightly steamed greens, milk, preferentially raw. As we all know, fresh fruits and vegetables as well as grains are great in that they contain vitamins and minerals essential to our health and well-being.

So now that you are convinced that Vince didn’t hate carbohydrates, here are a couple of diets that Vince prescribed to both beginners and off-season bodybuilders.

Vince’s Weight-Gaining Diet was prescribed to those novices that were underweight and looking to gain size and strength. Taken from his classic book, The Wild Physique, foods included for breakfast where meats, eggs, raw milk and whole wheat bread. Lunch included eggs, meat and fruit and vegetables, with the same recommendations for dinner. Milk, fruits, whole wheat bread…all of these foods allowed for moderate carbohydrate intake in this well-balanced diet.

A second diet that contained carbohydrates was Vince’s Maintenance Diet for off-season bodybuilders. Also found in The Wild Physique, this diet consists of a eggs, raw milk and 2 slices of bread for breakfast, lemonade, meat and fruit and vegetables for lunch and the same for dinner with a dessert! As Vince puts it, it’s a maintenance diet! You are allowed to indulge a little while you are off season. What kind of life are you having if you can’t enjoy a treat every now and then.

Vince of course loved his ketogenic diets. The Steak and Eggs Diet, The 36 Eggs a Day Diet. However, these also incorporated carbohydrates! The Steak and Eggs Diet was just another Cyclic Ketogenic Diet with the purpose of dieting for competition, and with Vince’s fat-loss diets, they also incorporated carbohydrate feedings every few days as clearly described in The Wild Physique:

“When dieting to lose weight, it is important to include one carbohydrate meal every 72-96 hours (no protein) to restore carbohydrates to the system and glycogen to the muscle. This promotes recovery and a better pump from your workouts. If you eat carbohvdrates after 3-4 days on a high protein/high-fat diet, it causes a diuretic action, releasing water from the tissues. People often report a lower bodyweight of several pounds when using this method”.

So as you can see, Vince loved his carbs! Just like everything in life, moderation is the key. Intelligently applying, carbohydrates are key to a bodybuilder’s diet. At the end of the day, Vince was of Italian heritage after all, so I am pretty sure he enjoyed his spaghetti every now and then. To be precise, he did! Every 72 hours when cutting up for competition! 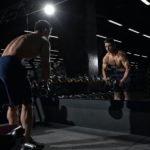 Next story :The Complete Guide To Vince Gironda's Books

Vince Gironda’s 8×8 system of training was originally termed as the « honest workout », because it is simply one of the most difficult and challenging workouts there is. Similar to the 10×10, it stimulates serious muscle hypertrophy along with fat loss. Although highly unorthodox, the 50 year old system continues to be used up until this […]
Saving Bookmark this article Bookmarked

The site of bubble gut’s on todays stage truly is a sad and disgusting site. It is no surprise that when I speak to the legends about the current bodybuilding scene, most say that it is a grotesque and monstrous site, because size has taken over aesthetics. During the Golden Era of bodybuilding, bodybuilding stars […]
Saving Bookmark this article Bookmarked
Next