Vince Gironda’s 8×8 system of training was originally termed as the « honest workout », because it is simply one of the most difficult and challenging workouts there is. Similar to the 10×10, it stimulates serious muscle hypertrophy along with fat loss. Although highly unorthodox, the 50 year old system continues to be used up until this day to to its effectiveness.

Origins of the Vince Gironda 8×8 Workout

From my understanding, the 8 x 8 system was originally used along with the 10 x 10 system by Vince Gironda in preparation for the NABBA Mr Universe competition. In combination with the anabolic Steak and Eggs Diet, Vince was able to get into peak condition after training in the 8 x 8 system for 6 months. The program was originally published in Vince’s Definition  booklet, and later editions contained several different programs.

Vince believed that to maximise the effect of an exercise on one’s physique, one should :

For this reason, Vince’s original 8 x 8 routine has you training ONLY one exercise per bodypart only. Vince would typically have the client working the routine as an upper body and lower body split on separate days, as follows :

Exercise selection is very important in the 8 x 8 routine. The important point is to understand your needs as a bodybuilder. Your needs will indicate whether you need more mass as a beginner, or to work on a certain weakpoint if you are an intermediate or advanced bodybuilder, to acquire a certain look and therefore your priority might be to work on shape and definition.  Understand that the suggested exercises are just that, a suggestion. There are beginner exercises which should not be an issue for most, and advanced exercises that require a superior level of mobility and range of motion to perform such as those recommended by Vince. I repeat, these are advanced exercises!

Beginner exercises recommended for each Body-Part

Advanced exercises recommended by Vince Gironda for each Body-Part

Many people might think that this seems boring, but it is very important to emphasize the effect of such a system. Because you are performing such a high volume using only one particular movement, the result is EXTRAORDINARY HYPERTROPHY ! I can’t emphasize this enough !! This program like the 10 x 10 will add muscle FAST !

Mohamed usually visits me twice a year for a refresher course in the spring and again, four weeks prior to the Mr. Olympia contest, in the fall. The last time I saw him, his precontest routine included three 2 1/2-hour workouts on the first day, with one hour off between training sessions. The workout consisted of attacking three different body parts with three exercises per part (a total of 24 sets per muscle area—8 sets per exercise). He repeated this same routine exactly twice more. From the moment he arrived in California, I started him on one dozen eggs a day and 20 liver tablets every three hours. The second day of Mohamed’s training was his arm day. When I work his triceps, we do a great job on his outer triceps head. This muscle adds something very special to an arm, and I always try and maximize its development in my pupils. The exercise we use for this is the kneeling ropepulley extension, the best triceps builder of all. It is performed on a cradle bench, a very small leather-covered platform, 16 inches (40 cm) high with an indented middle to support the elbows.

After we worked three different aspects of Mohamed’s biceps—the bottom, middle, and top—it soon became evident that gaining size was no problem. His arms were huge. It was at this time that I designed a specific exercise for the belly of his biceps. It is called the cable shortrange curl. He found this new exercise to be perfect for his needs.

On that second workout day, I noticed that Mohamed’s calves were a little down in size, and I concluded that he was overworking them in Canada. Accordingly, I only gave him 8 sets of 20 reps on the prone hack-slide machine.

On the third day, we worked his upper legs. I started Mohamed with 8 quick sets of 8 reps on the hack-slide machine. I hurried him through in just ten minutes. This was followed by 8 sets of 8 reps on the Roman chair squats. Finally, we hammered the thigh biceps with a variety of thigh-curl machine exercises and concluded working the thighs with lay-back leg extensions.

Abdominals were trained with 8 sets of flat leg raises and 8 sets of half sit-ups (crunches). I kept his reps to 8 in these exercises, too. Mohamed’s pre-Olympia routine varied slightly according to his energy levels, and, of course, whether he was training in my gym in California or Ken Wheeler’s in Toronto.

So if you are stuck in rut and need to kick-start hypertrophy again, give the 8 x 8 a chance and you will be surprised with thte gains. Similar to what Arnold Schwarzenegger said…. «It’s old, but not obsolete»! 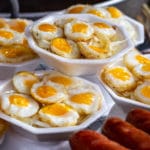 Next story :Vince Gironda’s 36 Eggs a Day Diet : Is it truly as Good as Steroids ?

Much has been written about Vince Gironda and his old school bodybuilding diets. In fact, there used to be a running joke in the late 70’s and early 80’s that used to go something like “Vince and Eggs”! After Vince has advocated his Steak and Eggs Diet, as well as the 36 Eggs a Day […]
Saving Bookmark this article Bookmarked

How Vince Gironda helped Arnold Bring His Legs Up To Par

Written by Dr Juan Carlos Cassano aka The Golden Era Bookworm When we look at comparison shots of Arnold in 1966, to the later Arnold of the late 60s and later still, the early 70s, the size, cuts, and muscular separation are obvious. His quadriceps matured and he had clearly improved on the muscular separation […]
Saving Bookmark this article Bookmarked

Many exercises that we take for granted nowadays were invented long ago. Take the Sissy Squat. Now here is an exercise that is both poorly understood and that has probably been around for over a century. It was practiced by most bodybuilders at Vince’s Gym, who searched to perfect their thigh sweep development to a […]
Saving Bookmark this article Bookmarked

Arnold Schwarzenegger. The Austrian Oak. The greatest bodybuilder of all time! Arnold has inspired millions if not billions of men around the world to take up bodybuilding, yours truly included. When I remember seeing Arnold as a kid in the movies, I remember seeing his huge arms and enormous chest. That Chest….that barrel-like chest was […]
Saving Bookmark this article Bookmarked

Written by Dr Juan Carlos Cassano aka the Golden Era Bookworm The Iron Guru was so known because of his unbelievable and uncanny ability to transform actors into tip-top shape ready for their roles in Hollywood movies. Therefore, it is no surprise that Vince helped Carl Weathers shape and cut his physique for the iconic […]
Saving Bookmark this article Bookmarked

When we think of Arnold Schwarzenegger, it’s hard not to envisage his massive chest and biceps, pumping iron at Gold’s Gym during the Golden years of Bodybuilding. Much is known about the routines Arnold would use in his competitive career, but not much is known about his initial mass programs. I recently created a video […]
Saving Bookmark this article Bookmarked

We all want big arms, and most of us will try just about any routine and exercise to get them. It is no wonder we have invented so many varieties of curls including Barbell Curls, Dumbbell Curls, Preacher Curls, Spider Curls, Cable Curls, and all their variations. Vince of course recommended that we change our […]
Saving Bookmark this article Bookmarked

The sight of bubble guts on todays stage truly is a sad and disgusting sight. It is no surprise that when I speak to the legends about the current bodybuilding scene, most say that it is a grotesque and monstrous site, because size has taken over aesthetics. During the Golden Era of bodybuilding, bodybuilding stars […]
Saving Bookmark this article Bookmarked

Written by Dr Juan Carlos Cassano aka the Golden Era Bookworm Muscular Bulk. This is what many people would call laying a foundation. Many beginners nowadays don’t understand the importance of this most important step in one’s bodybuilding journey. Just look at any natural shows and most competitors look like they POWs fresh from a […]
Saving Bookmark this article Bookmarked
Next

People reacted to this story.