Sleeve busting Arms, we all want them! I remember the first time I saw the film Predator starring Arnold Schwarzenegger in 1987, and all I remember was how mesmerized I was about the size of Arnold’s arms! They were gigantic, and as a young boy, I dreamt of having huge arms too! I’m sure you can relate. Who doesn’t want huge arms? It’s probably one of the main reasons why most youngsters get into the Iron Game. Well, fortunately for us, Vince Gironda taught us how to build huge arms fast! His Balanced Arms booklet is the quick cheats guide to growing massive guns!!

The Best of Golden Era Knowledge on Building Arms

What’s great about this specialization course is that it is based on the knowledge and tried and tested programs that worked for the silver and golden era pioneers of the sport. Understanding that the likes of Larry Scott, Don Howorth, Freddy Ortiz and Arnold Schwarzenegger used the exercises listed in this program should convince you of it’s effectiveness. All of these men possessed phenomenal arm development. What’s more, Vince experimented on himself first, and then these bodybuilders, to see the arm building potential of these exercises. The book is dedicated to Larry Scott, who no doubt also heavily influenced Vince’s principle.

The exercises listed in the book Balanced Arms include those that in Vince’s opinion, are superior at building massive arms. These include the following:

As can be seen from the list, the exercises reflect both the knowledge of Vince Gironda and the knowledge of his pupils, such as Larry Scott, who was well known for religiously practicing the Preacher Curl and all it’s varieties. Each exercise is explained in great detail, as well as the routine and frequency, which is vital to the execution of the routine. The books is fully illustrated to help pupils execute each exercise correctly.

Based on Vince’s vast experience, the book is full of Golden Era wisdom on arm training. Although under 20 pages long, the booklet, like all of Vince’s publications, are full of useful tips that one can immediately incorporate into ones workout. For example, some of the tips that Vince gives is to reduce all if not most physical activity, to allow for the arm specialization course to take effect. Another great tip given by Vince is to include or even increase one’s leg workouts, to both increase the metabolism and to increase one’s ability to increase arms size. According to Vince, leg training is vital to increasing the size of one’s arms, and this has been recently proven by science.

A guide on correct supplementation is also given, as this will aid in creating an anabolic environment necessary for arm muscle hypertrophy. Tri-germ oils, beef liver and other supplements are recommended, and a supplement course is detailed that is to be followed with this program.

Once again, www.vincegironda.com has done it again! Vince Gironda has come out with a new reproduction that honours the original publication that circulated during the golden years of bodybuilding. Comparing the newly released reproduction of Balanced Arms to my original copy, I can tell you that it is an exact reproduction of the original copy. Every image is the same, and so is every word…even the fonts are the same! Vince Gironda has done a brilliant job at reproducing this timeless classic.

So if you want to build yourself a big set of guns, grab yourself a copy! You can get your copy today by visiting the shop store, along with many other newly released reproductions of Vince Gironda’s original booklets. 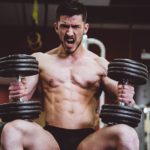 Starting in the 1960s, Vince Gironda began logging everything he knew about training and nutrition. But this wasn’t theoretical knowledge. It was the direct result of working with hundreds of bodybuilders since his gym doors opened in 1946.  In total, he wrote 17 books, which displayed his incredible knowledge of anatomy, physiology, nutrition, and how […]
Saving Bookmark this article Bookmarked

How do you build more muscle in the shortest time possible?  This is the intent of A Muscle Has Four Sides by Vince Gironda, a book that provides a complete exercise plan, nutrition plan, and workout tempo aimed specifically to get the fastest gains possible in the shortest amount of time.  The secret to this […]
Saving Bookmark this article Bookmarked

Vince Gironda designed the Weight Gaining Diet for underweight individuals who were new to bodybuilding and needed to drastically increase their bodyweight.  Whereas the All Protein Muscle Building Diet was a low carb diet designed to add muscle mass without any increase in bodyweight, the Weight Gaining Diet aims to drive up both muscle mass […]
Saving Bookmark this article Bookmarked

Traditionally, when a bodybuilder wanted to increase muscle size, they maximized food intake.  This approach to nutrition increased the risk of the bodybuilder losing shape and definition, as a ‘smoothing’ effect occurs due to increased body fat and water retention.  This led Vince Gironda to develop the ‘All  Protein Muscle Building Diet’, which enabled bodybuilders […]
Saving Bookmark this article Bookmarked

Vince Gironda was well known for his belief in supplementing the diet of the bodybuilder, simply because during modern times, over farming stripped the nutrients from the natural foods that we eat and that were supposed to provide these nutrients. The fact that nutrient content of food is decreasing has detrimental effect on our health, […]
Saving Bookmark this article Bookmarked

Vince Gironda’s recommendations for high quantities of beef and organ meats would certainly lead to the assumption that he wasn’t a huge fan of vegetarianism.  However, there is a time and a place for everything, and a vegetarian diet is no exception.   Whilst Vince would never recommend it for a young man aspiring to build […]
Saving Bookmark this article Bookmarked

What is Cholesterol? Cholesterol belongs to a group of fats referred to as Sterols. Sterols are found in all fats and oils, especially animal fat like eggs, egg yolk, liver, kidney, brain, fish oil and oysters. It is also found to a lesser degree in meat, whole milk, cream cheese and butter.  Cholesterol is NOT […]
Saving Bookmark this article Bookmarked

Although fasting has only become a popular mainstream diet in recent years, this is another protocol Vince Gironda recommended way back in the 20th century.  Vince observed that eating heavily over extended periods of time would result in a heavy build-up of mucus in the intestinal tract, which would prevent the proper digestion and absorption […]
Saving Bookmark this article Bookmarked

The nutrition plans prescribed by Vince Gironda were always based on achieving a particular objective, for example, maximum muscle or definition.  However, he was very clear that each one of these diets was only a short-term solution for the purpose of preparing the bodybuilder for a competition or a photoshoot, and was not to be […]
Saving Bookmark this article Bookmarked

The Maximum Definition Diet was one of Vince Gironda’s most famous diets.  Widely-known for generating incredible results in terms of fat loss and definition, Vince prescribed it to bodybuilders who were serious about stepping up to a competitive level.  Whilst this was an incredibly challenging diet to follow, due to the extremely low intake of […]
Saving Bookmark this article Bookmarked

Vince was known as The Iron Guru for a reason. Not only did he produce the first Mr Olympia champion in the late Larry Scott, but he was the trainer to the stars ! Vince Gironda was recruited by Hollywood executives keen to ensure their leading actors and actresses were lean on film. Vince’s list of […]
Saving Bookmark this article Bookmarked

A lost art from the Golden Era of Bodybuilding was this concept of “body sculpting”… where a man could envision a physique and enter the gym to work the exact muscles that sculpt his ideal body.  In the history of bodybuilding, there has been no greater body sculptor than the legendary Vince Gironda, who could […]
Saving Bookmark this article Bookmarked

There’s a big difference between a bodybuilder and a weightlifter. A bodybuilder sculpts the body to make each and every muscle standout.  Using Vince Gironda’s workout methods, you can attack all four sides of the muscles to create shape, definition, and aesthetics.  A weightlifter on the other hand, aims to maximize how many weights he […]
Saving Bookmark this article Bookmarked

Who is Vince Gironda?

Nobody has contributed more to the sport of bodybuilding than Vince Gironda.  His relentless work ethic, vast knowledge of the human body, and a die-hard passion for the sport of bodybuilding put him at the forefront of the Golden Era, training more Mr. Olympia’s and Mr. America’s than anyone else in history.  A genius rebel […]
Saving Bookmark this article Bookmarked
Next