The sight of bubble guts on todays stage truly is a sad and disgusting sight. It is no surprise that when I speak to the legends about the current bodybuilding scene, most say that it is a grotesque and monstrous site, because size has taken over aesthetics. During the Golden Era of bodybuilding, bodybuilding stars flocked to Vince’s Gym to be trained by the Iron Guru himself, with the hope of achieving beautiful aesthetic physiques.

Vince knew how to mould a mass of muscle and sculpt it into a form that would bring Michaelangelo to his knees! Vince would supervise the training and dietary programs of legends like Larry Scott, Don Howorth, Arnold Schwarzenegger, Bert Elliot, Reg Lewis, Ray Routledge, John Tristam, Dominic Juliano, Gable Boudreaux, Freddy Ortiz and Mohamed Makkawy. According to Vince Gironda, the abdominal muscles are perhaps the most misunderstood area of all to develop.

Once again vincegironda.com has come out with another classic bodybuilding booklet, and it is an exact replica of the original booklet that once sat at Vince’s Gym!

6 Weeks Abs is Back!

As a well known collector of bodybuilding booklets around the world, I am constantly asked by many fans as to where I find and purchase my booklets from. Searching for original booklets requires knowing what you are looking for and that takes a lot of experience. Old editions of these booklets can also cost a lot of money. Some of these go for 100 to 200 dollars on eBay! Fortunately for the current generation of bodybuilders and bodybuilding enthusiasts, www.vincegironda.com has rereleased the original booklet in it’s original format, giving today’s current lifters the opportunity to enjoy and learn from the original knowledge of Vince Gironda without breaking the bank.

How do I know that this new booklet contains the same information as the original booklet as published by Vince Gironda? Because I happen to have many different copies of the original editions that Vince Gironda published over the years. Vince Gironda initially wrote about training the abdominals back in the early 60s, but by the late 70s and early 80s, he had devised his knowledge on the development of abdominals into a 6 week program that gave prize winning abs to anyone who undertook the course. This rereleased booklet represents the exact course that he finally achieved after 35 years of applied bodybuilding knowledge from the Iron Guru himself! You cant beat that!

I consider this 24 page booklet one of Vince Gironda’s masterpieces. When you compare the previous Abdominal booklet editions that Vince came out with, you quickly realise how Vince began to compile the knowledge he gained over the years and how he finally came out with this 6 week course.

The booklet is very logical in reading, as it initially details the myths and facts about abdominal training to set your mind straight about how to approach training the abdominals.

The booklet then emphasizes the importance of nutrition, supplementation and dieting to manipulate the metabolism of the trainee, to allow for maximum fat loss whilst building muscle naturally. This is one of the most important concepts to training the abdominals according to Vince, as only through fat loss will one’s abdominals to become visible.

Vince also breaks down the important exercises necessary to bring out maximum development of the abdominal musculature, and details which ones one should avoid. In doing so, he finally breaks down a logical approach to training the abdominals in a 6 week course that is sure to bring out maximum abdominal definition without the need of dangerous diuretics or synthetic steroids.

Vince always adhered to this philosophy, and the development of the abdominals is no exception. Health is wealth! And for those enquiring as to whether abdominal musculature is favoured over reducing the size of the waist….fear not! Vince has you performing Old School Vacuums from day 1! Now that’s old school abdominal training!

Conclusion: Say not to the Bubble Gut!!

I would definitely recommend this book for anyone wishing to obtain classical abdominal development. By that I mean, that old school midsection that was prized so many years ago, and is no longer seen in today’s world of bubble guts!

Reducing the waist, and adding abdominal musculature makes the centre of the physique look like it was studded with jewels! Much better than looking like you belong in a maternity ward! What’s also great about this book is that the Vince teaches you how to bring out the abdominals using natural means without the use of chemicals or steroids. Having said that I would also recommend this book to those looking to both simply have an improved physique for the spring and summer or for those with more serious ambitions like entering a physique contest.

If you want improved abdominals, then try Vince’s 6 week abdominal course! You wont be disappointed! 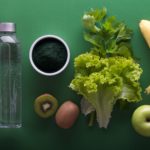 Much has been written about Vince Gironda and his old school bodybuilding diets. In fact, there used to be a running joke in the late 70’s and early 80’s that used to go something like “Vince and Eggs”! After Vince has advocated his Steak and Eggs Diet, as well as the 36 Eggs a Day […]
Saving Bookmark this article Bookmarked

Arnold Schwarzenegger. The Austrian Oak. The greatest bodybuilder of all time! Arnold has inspired millions if not billions of men around the world to take up bodybuilding, yours truly included. When I remember seeing Arnold as a kid in the movies, I remember seeing his huge arms and enormous chest. That Chest….that barrel-like chest was […]
Saving Bookmark this article Bookmarked

Many exercises that we take for granted nowadays were invented long ago. Take the Sissy Squat. Now here is an exercise that is both poorly understood and that has probably been around for over a century. It was practiced by most bodybuilders at Vince’s Gym, who searched to perfect their thigh sweep development to a […]
Saving Bookmark this article Bookmarked

Written by Dr Juan Carlos Cassano aka the Golden Era Bookworm The Iron Guru was so known because of his unbelievable and uncanny ability to transform actors into tip-top shape ready for their roles in Hollywood movies. Therefore, it is no surprise that Vince helped Carl Weathers shape and cut his physique for the iconic […]
Saving Bookmark this article Bookmarked

Vince Gironda’s 8×8 system of training was originally termed as the « honest workout », because it is simply one of the most difficult and challenging workouts there is. Similar to the 10×10, it stimulates serious muscle hypertrophy along with fat loss. Although highly unorthodox, the 50 year old system continues to be used up until this […]
Saving Bookmark this article Bookmarked

We all want big arms, and most of us will try just about any routine and exercise to get them. It is no wonder we have invented so many varieties of curls including Barbell Curls, Dumbbell Curls, Preacher Curls, Spider Curls, Cable Curls, and all their variations. Vince of course recommended that we change our […]
Saving Bookmark this article Bookmarked

When we think of Arnold Schwarzenegger, it’s hard not to envisage his massive chest and biceps, pumping iron at Gold’s Gym during the Golden years of Bodybuilding. Much is known about the routines Arnold would use in his competitive career, but not much is known about his initial mass programs. I recently created a video […]
Saving Bookmark this article Bookmarked

How Vince Gironda helped Arnold Bring His Legs Up To Par

Written by Dr Juan Carlos Cassano aka The Golden Era Bookworm When we look at comparison shots of Arnold in 1966, to the later Arnold of the late 60s and later still, the early 70s, the size, cuts, and muscular separation are obvious. His quadriceps matured and he had clearly improved on the muscular separation […]
Saving Bookmark this article Bookmarked

Written by Dr Juan Carlos Cassano aka the Golden Era Bookworm Muscular Bulk. This is what many people would call laying a foundation. Many beginners nowadays don’t understand the importance of this most important step in one’s bodybuilding journey. Just look at any natural shows and most competitors look like they POWs fresh from a […]
Saving Bookmark this article Bookmarked
Next